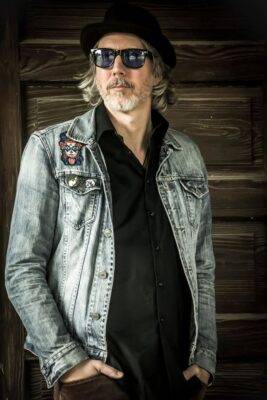 Denny was born in Salinas, California, but raised in Central Illinois, the oldest of four children. As such, he lacked the guidance of a senior, hipper sibling, and became a student of Casey Kasem's Top 40, immersing myself in the Pop hits of the 80s, more or less unaware of anything else that may have existed beyond the confines of that weekly countdown. Soon enough though, MTV did it's part to broaden those horizons, and a failed relationship with the Columbia House Record Club's 12-Albums-For-A-Penny offer got him his real start in both delinquency and musical education, as he never did pay for my requisite number of additional purchases, but he did(and still do)enjoy the hell out of the ones he essentially purloined before their legal department realized he was an 11 yr. old, impervious to threats of litigation.